The origins of Freemasonry are uncertain and historians disagree about how the modern masonry came into being. There are two principal but differing views. One suggests that it emerged directly from the medieval guilds and lodges of the stone masons who built the great cathedrals and castles of the period. The other proposes that gentlemen 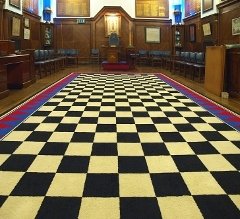 intellectuals, influenced by the discourses of enquiry in the Enlightenment years of the seventeenth and eighteenth centuries, adopted the organisation and working practices, implements and accoutrements of the stone masons as an appropriate framework for the purposes of moral development.

Whatever the truth of the origins, however, the objectives remain the same – to foster a high moral and ethical approach to life and to encourage thoughtfulness for others, kindness in the community, honesty in business, courtesy in society and justice in all things. It also aims to facilitate friendship and to encourage its members to serve the community and to practise universal charity.

The earliest record of the making of a Freemason is that of Elias Ashmole, the famous antiquarian and founder of the collection of artefacts now held in the Ashmolean Museum in Oxford. His diary shows that he was accepted into a Masonic Lodge on the afternoon of the 16th October, 1646, in Warrington. On 24th June 1717 four London lodges formed the first Grand Lodge and on 27th December 1813 The United Grand Lodge of England was constituted with 647 lodges.

Today, English Freemasonry under the United Grand Lodge of England has over a quarter of a million members in England, Wales and throughout the world, meeting in over 7,000 lodges. Freemasons are encouraged to assist those in need whenever and wherever they can, so, while Freemasonry is not primarily a charitable organisation, charitable actions result from applying its principles. In England and Wales, there are 47 county organisations that provide support and co-ordination for the lodges meeting in their area. Berkshire Freemasonry is one of those local organisations with over 90 lodges and more than 3,000 members.

For more information take a look at our frequently asked questions page or contact us.

This website uses cookies to improve your experience. We'll assume you're ok with this, but you can opt-out if you wish. Accept Read More